I Love Zoom Classes! Who Knew?

As I have mentioned previously, we moved in July. Before moving Dennis, my husband, was preparing the lawn mower the, gas needed to be emptied before the move.

Let me explain a bit about Dennis. He is smartest person I know. He designs gadgets that are pretty remarkable, solves any mathematical problem and fixes pretty much anything. What he lacks though, is common sense. This is the guy who the day after our wedding came out from the bathroom and asked, “where would I find my toothbrush?” Which should have alerted me to what I was getting myself into for the next 50 or so years. He is also the guy who once gave me a card that read – “For Someone Who’s Been Like A Mother to Me.” (I am not going to talk about the phycological scars I was left with for that one.) For the past 52 years Dennis has walked a straight line through life while I seem to dance around him handing him the tools needed , picking up what he’s discarded or just keeping him from killing himself. Things like the time he was testing a procedure for cleaning tungsten in my kitchen. I looked up and he had a pan on the stove. Suddenly I hear, “Oh, the boiling point of acetone is 132 degrees Fahrenheit” as his shirt was on fire and his beard was being singed or the time I came into the basement where he was rewiring the house. He had removed the electric box cover. There was only open wires showing and was doing some wiring while the power was still on! Granted I could have killed him when I screamed and the entire power went out on the block. He lived, but barely. I could go on for hours.

Back to the lawnmower. When Dennis emptied the mower he placed the gas cap on the top of the car. Doesn’t everyone? Then he realized he needed something at the store. He returned and low and behold the gas cap was gone. “Not a problem, he said, it is probably across the street in the parking lot. I will run over tomorrow and look for it.” Now is the time you need to know that Dennis never does today what he could put off till tomorrow. Next day he goes to the lot and strangely cannot find the gas cap. He tells me, “Don’t worry, I will get a replacement once we move.” We move. Pretty quickly it’s time to mow the grass. Both he and I start looking for a replacement gas cap. We find that this is not so easy. It’s a Craftsman brand, how difficult can it be? Let me tell you, it is difficult. Dennis starts visiting different hardware stores and begins purchasing gas caps. Each of these replacements cost between $7 and $15. He ends up with seven. None of them fit. Dennis also does not like returning things so we have a lovely assortment of gas caps now. I start looking online. It doesn’t matter that it’s a Craftsman. What is important is the make and model of the engine. (By this time I am learning a great deal about lawnmowers.) We cannot find any information on the engine of the mower and believe me we looked. I now have $100 and about 20 hours of online searching invested in the mower. Finally, I suggest he go out and buy a new mower. By this time we have a lawn that looks like a nature preserve. We have neighbors, whom I don’t know, we can’t make a bad impression immediately, so we spend $500 on an electric lawnmower to replace a gas cap! Dennis assembles the mower and tries to get it going. Six hours later he is still working on the mower. He is a fairly patient person but this has him pretty stumped. As it is getting dark, I find the local newspaper and what do I see first thing? An ad for “Bob” who does mowing. It seemed like destiny. I convince Dennis that we can have “Bob” do it. By this time he is pretty willing for me to make that call. He gets busy disassembling the mower and trying to fit it back into the box. That is another story for another time.

I give “Bob” a call. He’s very nice and says he will drop by in an hour or so. Bob turns up and tells Dennis he has been doing this for 30 years, gives him a great price and tells him he can get to it on Monday. Bob looks to be about 75 and mentions that his wife is 87. Dennis couldn’t understand why Bob gave his wife’s age but then again he was a friendly and talkative guy. Dennis assumed he had a crew of young people doing this job. Side note - our lawn is not that easy. It’s not large but there is a two foot wall around the entire yard. To mow it you have to get the mower over the wall and we have quite a few large trees to mow around. Not Falling off the edge is fairly tricky. Monday comes and I look out in my front yard and there are two elderly people working on my lawn! Granted, I am not young, but they look quite a bit older than me. I see that “Bob’s” 87-year-old wife is bending over picking up sticks on my lawn! Bob has lifted the mower onto the lawn in is mowing away! I am so mortified I can’t walk outside. Bob does an amazing job. When finished he tells me this is their third yard of the day and they still have one left! He also tells me he doesn’t like to take advantage so he will wait to hear from me to mow again. My thought was to have him do this one time and be done with it. I can then just ignore the problem. Next Monday comes. My doorbell rings. It’s Bob, “You haven’t called. Something wrong?” I say, “Why no Bob, everything is just fine.” I don’t want to mention my considerable guilt. Bob adds, “Well when do you want me to mow again?” Not wanting to hurt his feelings I agree that he should mow tomorrow.

Bob and his wife have now been doing my lawn since August. The guilt is killing me. Dennis? Why he hides out in the garage when they are doing the lawn and sighs a sigh of relief when they leave. Each week I hide in the house as these two aged lovely people make my lawn look perfect. Winter is coming, this will end. Although secretly, I am now hoping Bob and his wife don’t die before next spring.

HOW TO SEW ART - TAMMIE BOWSER

This month I took two classes on Zoom from Tammie Bowser from her How To Sew Art classes. I wasn’t too keen on taking a class on Zoom but I had purchased her software last year and had done nothing with it. I figured, what the heck I would try.

I was impressed with the whole process! I found I got so much more out of this class than usual because everything about it was easier.

Now for the class.

When Tammie teaches you do not have to own the software. You choose a picture you want to make into art and send it to her and she sends you the pattern to print out and she will also send you a kit with the correct fabrics. I took two classes. The first was using pixels and I purchased the kit from her. The second was using contour shapes. That one I made my own kit and chose my fabrics from my stash. Each class was about four hours. She remained online to answer any questions after the class. The whole process was very relaxed.

I chose a picture of a dog that I loved for the pixel class. After I completed it I realized I should have found a picture with a bit more contrast. Tammie sent me a file to print from my computer. The pattern printed 12 pages that I then taped together to make about a 27”x 30” project. I only needed 9 fabrics. The fabrics were cut in ¾” strips. Her method is surprisingly easy. It’s all done with numbers and you really can’t tell what is happening until you are almost done. I made some mistakes by not adding a bit of glue to some of the strips and I removed the pattern too soon. But it was a learning process so I didn’t get too upset about it. It took me about 8 hours to put all the fabrics down. I will be quilting this project next week.

I liked the Contours Class a bit more. The pattern was based on the contrast of the picture. Therefore, there were pieces of many shapes and sizes. I made my own base which is a way to hold the fabric in place and used my own fabrics. I chose a picture of an African American woman that I found that spoke to me. This process was much more involved. It took me a good two weeks of working each day to complete. I couldn't make out the face until the very end. I made a huge mess in my sewing area but it was so very worth it. I am pleased with the results. I have added some pictures to show the process. 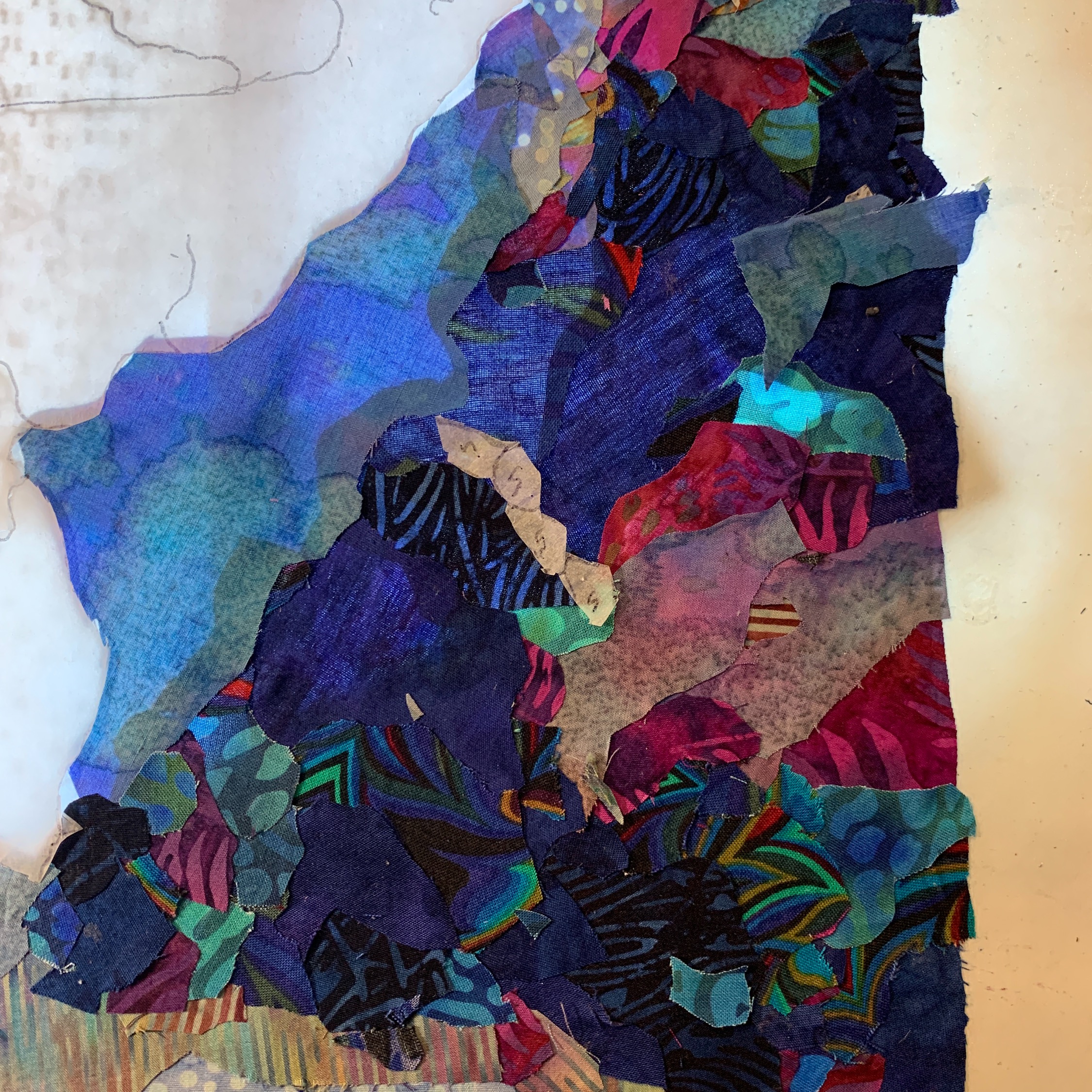 The pattern looks confusing but it is a simple and gratifying process.

Will I do this method again? I will. I have the perfect picture that will be stunning. I will post when I get it done.

To contact Tammie Bowser for information on classes send her an email at: tammie@howtosewart.com

My advice. While we are all distancing, take a class. It will make the winter go by a lot quicker.

For now, I give you my Irish goodbye

RECIPE OF THE WEEK

I use this on pork tenderloin all the time. You can let the tenderloin sit in the marinade overnight or or a few hours. You can grill the tenderloin or bake it in the oven. Just don't overcook the pork! 160 degrees is perfect. Served with teeny-tiny baby potatoes and Brussel sprouts it's a perfect meal.

Combine all marinade ingredients and reserve 2-3 Tbsp. Place the pork tenderloin and marinade in a Ziplock bag and let marinate for at least 3-4 hours.

Preheat oven to 350 degrees. In a hot skillet over medium-high heat, sear each side of tenderloin for 2-3 minutes. Place in the oven and cook for 30-40 minutes or until the meat has reached 160 degrees. Let rest for at least 5 minutes before slicing.

Meanwhile, place the skillet back on the stove over medium heat. Add the chicken broth and scrape up all the browned pieces from the bottom of the pan. Add the marinade and let it boil down for 2-3 minutes. Add the butter and remove from heat stirring until butter has melted. Pour over the pork tenderloin and serve.

From the Love of Cooking

‘By three methods we may learn wisdom:

First, by reflection, which is noblest;

Second, by imitation, which is easiest; and

third by experience, which is the bitterest.’

Will I Never Learn?